SHANGHAI—Prices for rare-earth metals continue to soar despite the prospect of short-term market disruption from the disasters in Japan, the No. 1 global importer. 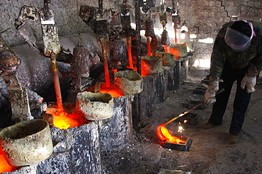 The numbers from China underscore how Beijing's policy to tighten control of this strategic industry continues to fuel a rally in a market for rare earths, a collective name for 17 minerals used in technology from mobile phones to military equipment. China controls more than 95% of the global production, and constrained supplies have prompted a rush into rare-earth mining globally over the past year.

But events in Japan have become another major focus for the rare-earth industry. The elements are used in a range of products turned out by the world's No. 3 economy—including cars, which have cerium in their glass, lanthanum in their batteries and neodymium in their electronics. Sustained factory closures in Japan could pinch demand from the country, whose aggressive buying in recent years has reflected concern Beijing's policies could make some materials unobtainable.

A correction was already underway before the earthquake, after a huge 2010 rally in major miners: Shares of U.S. producer Molycorp Inc. are off about 10% this year while Lynas is down 2.9%. Shares in China's big producer,Shanghai-listedInner Mongolia Baotou Steel Rare Earth, however, are up around 17%.

"One could anticipate a positive impact for rare earths, as they are used in green energy," said one Europe-based trader. "It seems to me people will focus more on renewables." 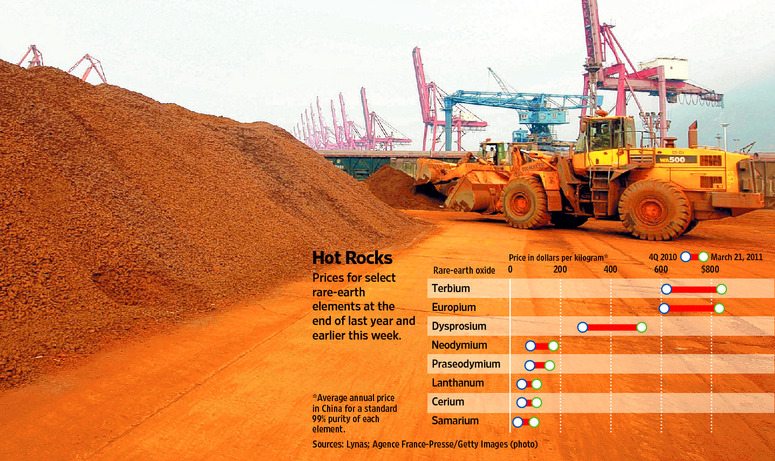 The trader said his Japanese clients indicate they are focused on more than business now, so information is in short supply.

But at least in some cases they are reaffirming orders. "They are not cancelling or delaying," said the trader.

Also shaping global rare-earth trends are rumblings in Washington, where critics of Beijing's export policies are urging retaliation, possibly with a case at the World Trade Organization.

Last week, several U.S. senators said Chinese miners should be barred from investing in the U.S. until rare-earth supplies are guaranteed.

Congressional aides say bills will shortly be introduced that could require the U.S. military to stockpile rare earths.

China set its initial first-half export quota at 14,509 metric tons, and policy makers haven't indicated when they will release a subsequent quota. Last year, exports came to 39,813 metric tons, valued at $940 million. Some analysts expect China to adjust mechanics of the quota, which now applies to all 17 of the elements and may have distorted pricing of some elements.

At the annual meeting of China's legislature earlier this month, Commerce Minister Chen Deming said quotas are needed to protect China's environment, according to the Xinhua news agency, and also urged other countries with prospects to produce rare earths to accelerate their mining-permit process so alternative sources can be developed.

"We are even willing to cooperate with countries like Japan in developing alternatives of rare earth because rare-earth resources are very limited indeed," Mr. Chen said.

—Chiun-Wei Yap in Beijing contributed to this article.

BEIJING (Metal-Pages) 29-Mar-11.
Chinese suppliers have again raised their offer prices for praseodymium/neodymium oxide during the past few days on the back of bullish market sentiment and an expected increase in raw material prices in both southern and northern markets.
...
http://www.metal-pages.com/news/story/53207/

The resource tax is one in a series of new measures unveiled this year by the Chinese authorities to upgrade the rare earth industry. China's Ministry of Environmental Protection announced earlier this month that tougher rules on emission limits for producing rare earths will take effect on Oct. 1 this year.

The rules are expected to drive small and medium rare earth enterprises out of the industry or force them to merge with big players, thus promoting industry consolidation.

Just a reminder that China?s new REE taxes go into effect from tomorrow.  In theory this should only affect China?s domestic producers of REEs, and with the large REE price rises that have already taken effect last year and this, China?s REE producers have little need to pass on the new tax. In theory, the west shouldn?t notice any difference in China?s export market.

videomart : No end in sight to rare earth dearth

?The general consensus is that it [pricing] is going to get worse before it gets better,? Rare Earth Industry and Technology Association (REITA) director Keith Delaney said.

Prices have skyrocketed over the past two years as China drastically curbs exports and the rest of the world scrambles to secure supplies of the metals, used in consumer electronics, electric vehicles and wind turbines.

Delaney, speaking on a conference call hosted by US-based Technology Metals Research, said that even with new production coming on stream at Molycorp?s Mountain Pass mine in California and Lynas Corp?s Mount Weld project in Australia, customers might struggle to secure supplies.

?The promise of Lynas and Molycorp gives us some hope, but they?ve told me they are pretty much sold out for their first phase of production,? he said.

REITA is a non-profit company that seeks to promote the rare earths industry in developed countries, and it has producers and consumers of the elements as its members.

According to Delaney, it was a question of when, not if, China stops exporting its rare earths.

?I?m hoping for a soft landing, that the Chinese gradually ween us off,? he said.

He said that the country had warned the world ?for years? that it would not be its eternal source of rare earth elements, and that the fact that China has been enforcing export quotas should have been ?very predictable?.

China has been consolidating its chaotic rare earths industry in a bid to curb illegal exports and reduce harm to the environment. A flood of cheap supply of rare earths out of the country in the 1990s forced mines elsewhere to close, giving rise to China?s monopoly on the metals.

Asked to comment on the supply/demand balance over the medium term for the materials, Delaney said: ?The supply/demand projections that I?ve seen don?t give me a lot of warm and fuzzy feelings.?

?We?re going to need many more rare earth properties to come into production before we?re out of the woods. We definitely need anything we can get.?

A major challenge Delaney saw facing the future of the industry was that of skills, as the closure of rare earths mines in the West while production shifted to China meant that people with the know-how to develop projects had been greatly reduced.

He called on the US government for another ?sputnik moment? to assist in developing skills and research and development to ensure there were adequate supplies of the crucial rare earth metals in the future.

The DFS is under final review by the Sundance Board of Directors.
Everything is proceeding on track, consistent with previous ASX announcements, and the DFS results will be released to the market as soon as the final board review is complete.

China posted a 568% year-on-year surge in the value of rare earth exports to $314 million in the first two months of 2011.but some estimate it could be a net importer by 2015?