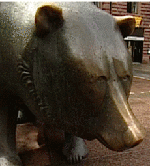 Last Thursday, Ramey joined UBS as its Dayton, Ohio, complex director, replacing Mark Pent, who was promoted to lead the firm's Pittsburgh complex. Ramey will report to Pete Kaldis, regional director for the MidAmerica region of UBS Wealth Management Americas-- which manages wealth for clients in Ohio and Western Pennsylvania.

Before joining UBS, Ramey worked at Citigroup Inc. (C) for nearly 14 years and remained at the joint venture with Morgan Stanley (MS) for more than a year, according to Financial Industry Regulatory Authority records.

Recent joiners from Bank of America Corp.'s (BAC) Merrill Lynch unit include Michael Monatlik and Leor Tzour. The team, based in UBS' Beverly Hills office, together generated $1.2 million in fees and commissions and had $183 million in assets under management. They report to David Bigler, branch manager.

Sullivan and Sorenson worked at Jefferies for more than three years, according to Finra records.

(STREET MOVES chronicles the migration of executives on Wall Street, with a particular emphasis on financial advisers with more than $1 million in annual production and who manage more than $100 million in client assets.)

April 7 (Reuters) - Foreign investors hunting for higher yields in the offshore yuan bond market have their work cut out for them.

This one-two policy punch has raised expectations that already low yields in the 'dim sum' bond market may fall further as yuan sitting in low-yielding bank deposits is used for investment options such as bonds and stocks.

Investors hunting for yuan exposure have settled for much lower yields in Hong Kong compared to those in the mainland because of a lack of supply to meet offshore demand and expectations of yuan appreciation.

Raymond Gui, a senior portfolio manager at Income Partners, who manages a $200 million yuan fund in Hong Kong and works with UBS in convincing mainland companies to sell bonds in Hong Kong, said the rate cut will embolden prospective issuers to tap this market as issuing costs will drop further.

'This is a positive impact for the bond market and we are expecting more issuances now,' he said.

Gui and other investors are already seeing volumes rise. Last week was the busiest ever for dim sum corporate bond issuance, with four deals coming to market worth 2.25 billion yuan.

Issuers, including a jumbo 1.38 billion yuan bond this week from Singamas Container Holdings have tapped the offshore bond market, and with Cheung Kong's maiden yuan REIT IPO coming soon, bankers are gearing up for more supply ahead.


With Beijing supporting the growth of the CNH market by reducing the offshore counterparty clearing rate, coming deals will see coupons trend lower.

SYDNEY -(Dow Jones)- Edward Leung is no longer co-head of UBS AG's (UBS) Perth office, having moved to New York with the Swiss investment bank about a month ago, the bank confirmed to Dow Jones Newswires Friday.

UBS moved into a larger office in Perth in March to accommodate its growing presence in the resource-rich region of Western Australia.

Financial services firms have been adding staff in Perth as the resources industry booms. Data from the Australian Bureau of Statistics point to a planned 32% increase in business investment predominantly in the resources sector for the year ending June 30, 2012 from a year earlier, according to economists' analysis. Expansion plans among miners are the most aggressive, with economists expecting 100 billion Australian dollar (US$105 million) to be invested in 2011-12. This would be around 95% higher than the prior year.

UBS is one of a few financial services firms growing its Perth operations as the resources dealmaking activity has become a key part of the Australian investment banking landscape. In Dealogic's preliminary first quarter review, the mining sector fueled merger and acquisition activity with US$7.5

billion of deals, the highest year-to-date volume since 2005.

SINGAPORE/LONDON, April 12 (Reuters) - A U.S. government probe into HSBC in India is the first significant sign of authorities' wider crackdown on Americans using bank accounts in Asia to evade taxes.

The U.S. Department of Justice's announcement that HSBC India may have helped potentially thousands of Americans dodge federal income taxes surprised many commentators, given that India is far from being a tax haven.

But lawyers say it seems likely that private banking units across Asia are now on red alert for similar investigations into their businesses.


0758 GMT [Dow Jones] Deutsche Bank (DB) is most likely to pip analyst estimates with better-than-expected 1Q earnings, says Bernstein Research. However, he is "less excited" about Deutsche and Barclays (BCS) further out, because the two will struggle disproportionally over falling fixed-income revenue and, in Deutsche's case, overly optimistic guidance, Bernstein analyst Dirk Hoffmann-Becking says. He remains favorable for UBS (UBS) and Credit Suisse (CS), saying they can generate returns close to or ahead of costs of equity in their securities units. Sees Credit Suisse hit by CHF500M over the strong Swiss franc, UBS with CHF150M. Rates UBS and Credit Suisse at outperform, Deutsche and Barclays at market perform; target prices are CHF23.80